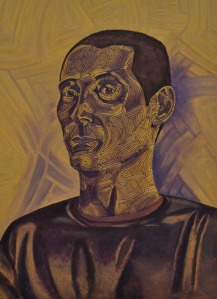 When I was first approach by Peter with the idea of putting shapes on his face, I was intrigued. It took a lot of work, with many revisions, but here it is.

I decided to use a purple/yellow complimentary system to keep attention on the shapes and their ability to be warmer and cooler give that they were keeping true to the original drawing. He also had brown tones originally and I wanted to represent him as realistic to his true nature as possible.

As in my Eye painting, the shapes make up Peter. Because of this, I wanted for him to be seen through them. His eyes are one of the few areas where the shapes are not, they connect you to him.